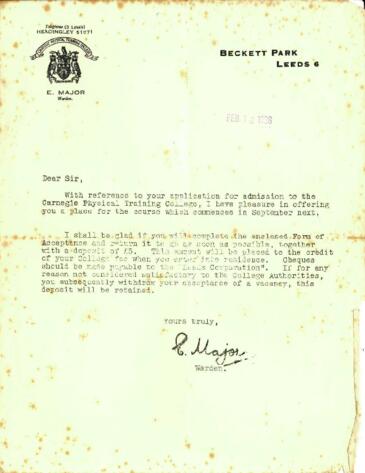 Major was born on 28 July 1898 in Blackburn, Lancashire. In 1901 his father, William Major, was a Gymnastic and Fencing Master at Thommasons Gymnasium in Bolton. Ernest Major studied at the Silkeborg College of Physical Training in Sweden, 1913-15. He was a member of the Carnegie Advisory Body prior to his appointment as Warden. During the Second World War he served as Lieutenant in the 51st Battalion, Royal Tank Regiment promoted to Major towards the end of the war. From 1946 onwards he was HM Staff Inspector for Physical Education. Major was awarded an OBE in 1977. He died in 1989.