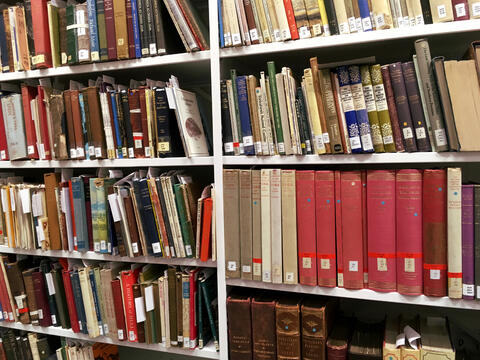 The Archive and Special Collections was formally established in 2008 within Libraries and Learning Innovation at Leeds Metropolitan University. Its purpose is to preserve, catalogue and otherwise maintain and identify collections held by the Library and wider University. Prior to that date a small and informal archive had been established by Keith Rowntree to preserve historical material from around the University although initially its main focus had been on the former Beckett Park Campus.
There had been earlier attempts to establish an informal archive within the Library around the 1970s and 1980s by Librarian Joan Newiss at Beckett Park. Much of this material was subsequently passed on to the then Leeds Archives at Sheepscar (now West Yorkshire Archives Service) the rationale being that it formed part of the history of education in Leeds and would be better protected and preserved.
At the City Campus rare, valuable and historic books were formed into the Z cabinet collection under the supervision of Librarian Sandra MacDowell. The majority were architectural books from two collections the Leeds School of Architecture Library and the West Yorkshire Society of Architects Library. The latter had been given over on permanent loan to the Leeds School of Architecture then part of Leeds College of Art in 1960. The two collections had been stored together for some time and reflected the close association between the Society and the School which stretched back the early part of the 20th century. The Leeds College of Art Archive was a collection of material collected by members of staff at the College since the 1920s, mostly but not exclusively items relating to the art college. It was stored at the City Campus Library although had been stored at the Faculty of Art and Design at other times.
These two strands at Headingley and City Campuses represent the foundation materials of the Archive and Special Collections, although the circle of historical material sought, collected, preserved and described has expanded across the University.

Leeds Metropolitan University was formed in 1992 formerly known as Leeds Polytechnic. Leeds Polytechnic was created in 1970 from a core of colleges situated on the Central Colleges site bounded by Calverley Street, Portland Way (originally St James’s Street) and Woodhouse Lane, now the City Campus. The constitute colleges were Leeds College of Commerce (1845), Leeds College of Technology (1927), Leeds College of Art (1846) and Yorkshire College of Education and Home Economics (1874). In 1976 the James Graham College (1959) and City of Leeds and Carnegie College (1968) joined the Polytechnic. The latter college was itself a merger of the City of Leeds Training College (1907) and Carnegie College of Physical Education (1933). These were the names of the constituent colleges immediately prior to forming Leeds Polytechnic but it should be noted that the titles and designations of the colleges changed many times during their histories.

The collection was formed in 2009 by Keith Rowntree from book stock at both Headingley and City Campus Libraries, including items from the former ‘Z’ Cabinet Special Collection. Some of this material was no longer required for the main stock others were captured because of their special interest. This collection has become a repository for books and pamphlets of local interest, these books complement other collections such as the art, architectural and social history material.

Other books may be added to this collection as appropriate.

On the Library Catalogue, Special Collections are catalogued according to AACR2 and using MARC21, classified by DDC23 and subject index using Library of Congress Subject Headings.

Books in the Local History Collection are catalogued on the Library's main catalogue.

This archival description gives collection-level information about an artificial collection of books, part of the Special Collections. These books have been catalogued on the main Library Catalogue. A link, ‘Local History Collection’, is provided in the Finding aids section of this description. Books in the collection are identified by a note on the catalogue: 'Archive Reference - Ask at the Help & Information Point'. Some library records also point to alternative copies of books in the Main Stock.