Material mainly relating to the Beckett Park Campus found and passed on to the Library many anonymously and without supporting information. 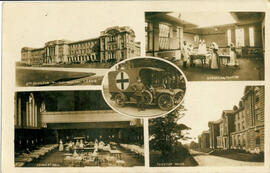 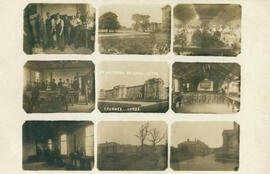 Photograph of stone plaque on rear of Grange

This stone plaque is a copy, made by the Beckett family, of an earlier one originally erected by Benjamin Wade on his Grange rebuild of 1626. The lines echo an inscription at Bemerton Parsonage by the Poet George Herbert. Although these lines were not made popular until the 1630s after Herbert's death which suggests that the inscription was a later addition to Wade's 1626 mansion.

View over the Acre towards The Grange showing surveying poles and layout, cars parked along edge. Mounted on stiff board.

This postcard does not appear to have any relevance to the College but was included in the Postcard Set which contained items related to the City of Leeds Training College.

The Lingiad was held in Stockholm from 17 to 25 July 1939. it involved over 7,000 participants from 12 countries. It was held to mark the centenary of the death of Pehr Hendrick Ling, regarded as the father of Swedish gymnastics.
Photographs showing the Carnegie and Loughborough combined team rehearsing their gymnastic routine in the Concert House, Stockholm. Inside the stadium during the opening ceremony procession of teams including Walter Winterbottom and the arrival of the Swedish king.